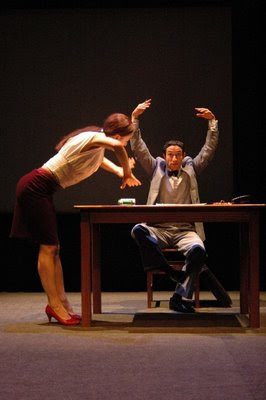 Telenovela is an ironic exploration of the world of soap operas: the daily afternoon drama

Dramas are built as if the characters live through cycles of never ending catastrophic events, following

familiar narrative themes: infidelity, secrets, pain, secrets and an excess of intrigue. The characters are one dimensional – ‘the good wife’ versus ‘the evil seducer.’

In Telenovela, Andrea Gabilondo’s choreography follows the free narrative sequence and inconclusive ending of each episode in television soap-operas. The interruptions of climatic moments by commercials are always present, returning abruptly to completely new circumstances and settings.

The piece is conceived for an actor (Viriato Morais) and a dancer (Andrea Gabilondo), who interweave dance and theatre in a unique language of performance. Exploring the possibilities of human expression though daily domestic drama, Telenovela is a portrait of the romantic imagination and fantasies of men and women.

Andrea Gabilondo was born in where she studied classical ballet and modern dance, winning a scholarship to Vaganova Ballet School of Leningrad (St.). She has worked professionally in ballet, contemporary dance and dancetheatre in and , working with Reinhild Hoffmann, one of the great choreographers of German Tanztheater for seven years, before coming to to concentrate on her own work, supported by the Portuguese Ministry of Culture.

Viriato Morais, free-lance actor, graduated from the Escola Superior de Música e das Artes do Espectáculo of Porto ( and Performing Arts). He has worked with several theatre companies in and , and toured to and with La Marmita. Currently he is the director of the theatre company V+Companhia de Teatro in Porto, Portugal.