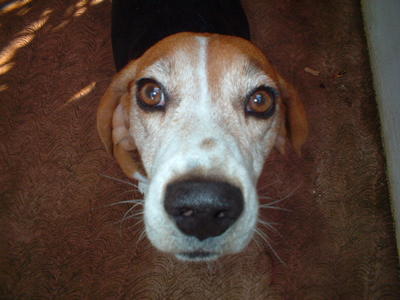 1- The cow known to science ultimately consists of atoms, electrons etc.. according to present-day scientific inference…….

2- The cow we perceive is not the word but the object of experience, that which our nervous system abstracts (selects)……

3- The word “Bessie” (cow) is the name we give to the object of perception of level 2. The name is not the object; it merely stands for the object and omits reference to many characteristics of the object.

4- The word “cow” stands for the characteristics we have abstracted as common to cow, cow, cow. Characteristics peculiar to particular cows are left out.

5- When Bessie is referred to as “livestock” only those characteristics she has in common with pigs, chickens, goats, etc. are referred to.

6- When Bessie is included among “farm assets” reference is made only to what she has in common with all other saleable items in the farm.

7- When Bessie is referred to as an “asset” still more of her characteristics are left out.

8- The word “wealth” is an extremely high level of abstraction, omitting almost all reference to the characteristics of Bessie.

So much for becoming an academic LOL
Posted by Andrea at 7:53 PM 1 comment: 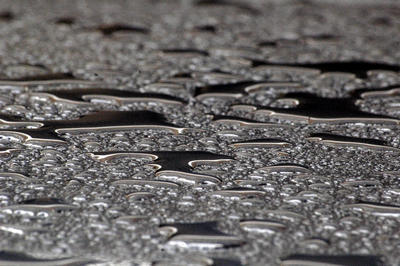 The face of the water, in time,became a wonderful book--a book that was a dead language to theuneducated passenger, but which told its mind to me without reserve,delivering its most cherished secrets as clearly as if it utteredthem with a voice………In truth, the passengerwho could not read this book saw nothing but all manner of prettypictures in it painted by the sun and shaded by the clouds,whereas to the trained eye these were not pictures at all,but the grimmest and most dead-earnest of reading-matter.
Now when I had mastered the language of this water….I had made a valuable acquisition.But I had lost something, too. I had lost something which could neverbe restored to me while I lived. All the grace, the beauty, the poetryhad gone out of the majestic river! I still keep in mind a certainwonderful sunset which I witnessed when steam boating was new to me.A broad expanse of the river was turned to blood; in the middle distancethe red hue brightened into gold, through which a solitary log came floating,black and conspicuous; in one place a long, slanting mark lay sparkling uponthe water; in another the surface was broken by boiling, tumbling rings,that were as many-tinted as an opal; where the ruddy flush was faintest,was a smooth spot that was covered with graceful circles and radiating lines,ever so delicately traced; the shore on our left was densely wooded,and the sombre shadow that fell from this forest was broken in one placeby a long, ruffled trail that shone like silver; and high above the forestwall a clean-stemmed dead tree waved a single leafy bough that glowedlike a flame in the unobstructed splendour that was flowing from the sun.There were graceful curves, reflected images, woody heights, soft distances;and over the whole scene, far and near, the dissolving lights driftedsteadily, enriching it, every passing moment, with new marvels of colouring.

I stood like one bewitched. I drank it in, in a speechless rapture.The world was new to me, and I had never seen anything like this at home.But as I have said, a day came when I began to cease from noting the gloriesand the charms which the moon and the sun and the twilight wrought uponthe river's face; another day came when I ceased altogether to note them.Then, if that sunset scene had been repeated, I should have looked uponit without rapture, and should have commented upon it, inwardly, afterthis fashion: This sun means that we are going to have wind to-morrow;that floating log means that the river is rising, small thanks to it;that slanting mark on the water refers to a bluff reef which is goingto kill somebody's steamboat one of these nights, if it keeps on stretchingout like that; those tumbling 'boils' show a dissolving bar and a changingchannel there; the lines and circles in the slick water over yonderare a warning that that troublesome place is shoaling up dangerously;that silver streak in the shadow of the forest is the 'break' from a new snag,and he has located himself in the very best place he could have foundto fish for steamboats; that tall dead tree, with a single living branch,is not going to last long, and then how is a body ever going to get throughthis blind place at night without the friendly old landmark.

No, the romance and the beauty were all gone from the river.

A Cloud of Milk in a Cup of Tea 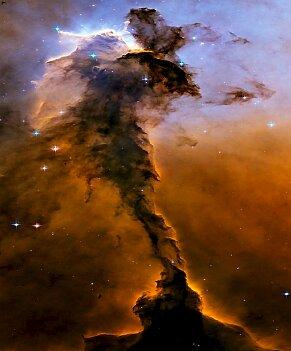 Photo of a Nebula probably by Hubbel


Just as in music or in painting there is no such thing as an "ugly" sound or outward "dissonance", so too in dance the inner value of every movement will soon be felt and the inner beauty will replace outward beauty.
From unbeautiful movements issues and unrecognized force and living power. From this moment on, the dance of the furture begins. 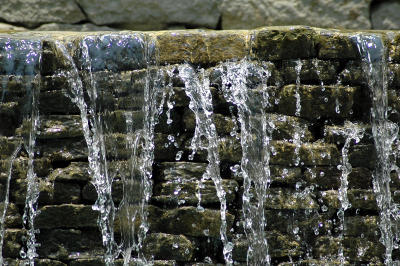 In the theatre the small experiment and the big show both can have quality and meaning. All that matters is that they should aim at capturing truth in life. Captivity kills fast. For this reason there are no conclusions. The method must always change. 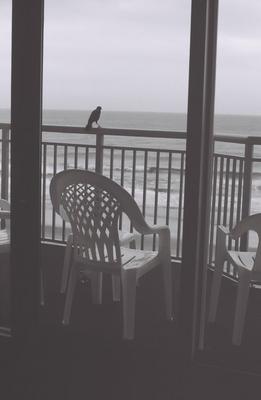 In the theatre, tall people should be forbidden to sit in front of shorter humans, especially if they have a fluffy, extended hairdo.
Or perhaps the theatre management could graciously offer cushions for the individuals whose height doesn’t reach more than 1.61 meters, as a preventive measure.

Anyone would think I am crazy. Here I am at a jazz concert and although I could just close my eyes and hear the music, I would also like to see what is going on stage, at the end I also paid a ticket.

Great! The guy in front of me just moved to his left and I can glimpse for a short time to a collection of marvellous Brazilian percussions.
It seems that the musicians are entering on stage; I know it because people applaud.
I don’t applaud, I can just assume that the applause is for the musicians, although it could be for anything that is going on stage. So I don’t know if they are already there, although the music I begin to hear I doubt is just playback.
…………………………………………
New music now.
My spine is hurting; I have been bending to the right and to the left, with no success. So I continue writing on the dark. People at my side stare at me with offensive looks. Well, I ask myself, isn’t this a free theatre? I can write while I listen to the music, don’t I?

I am tired of staring at this man’s hairdo. Actually, I am beginning to hate him. The music seems just too loud and by the way, the synthesiser sound has a too high pitch, why he just plays does uncomfortable high notes? I want to scream.

Hey, the star of the show moved from centre stage to his right, I can see him!! He looks like Santa Claus!!!. It is Christmas yet?
He has long white beard, long white hair and a hat. ………….Hermeto!!!!!
Well yes, I forgot that it was his concert that I came to “watch” and hear. My memory got lost between the fluffy expanded grey hair of this tall man sited in front of me.
Posted by Andrea at 4:28 PM 4 comments: 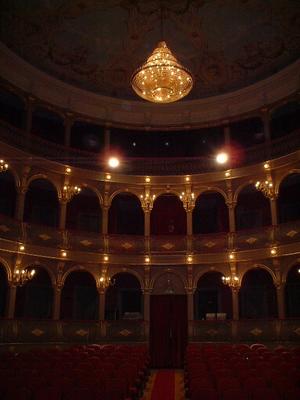 If you scroll down, there is a post where there are instructions on how to write a dada poem. I was curious and did it. This is the result.
The compilation of random words was taken from an interview with Salman Rushdie about his latest book. But because I cut the article, the name of his new book and the person that wrote the article were lost into the dissection.

Piles of junk for the grace of a lost God
Rusting worn metals,
preaching resistance to time

Grinding paradise fallen in love with a supermodel
Preposterous kind in a modern world
Poorly plotted, splitting wood and sound 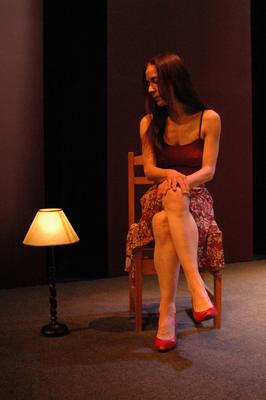 An audience may sit waiting for a performance to begin, wanting to be interested, persuading itself that it ought to be interested. It will only be irresistibly interested if the very first words, sounds or action of performance release deep within each spectator a first murmur related to hidden themes that gradually appear.

Peter Brook
Posted by Andrea at 2:23 PM No comments: 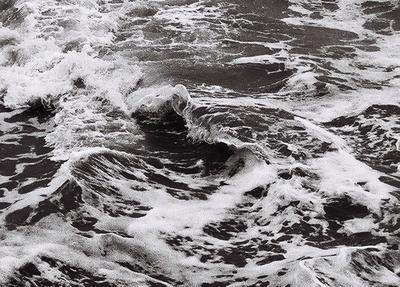 All arts are siblings
kindling one another,
jointly giving everlasting glow

Watching at a Tree 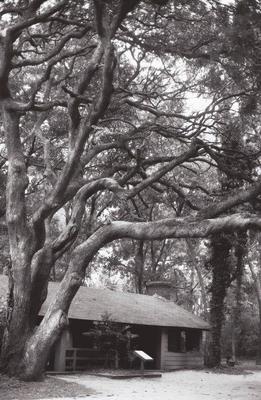 When I look at a tree

It gives me feelings of belonging
Being part of the vast Universe
Majesty, admiration, ancient security

I get closer
The perspective of its branches
Envelope me with a fatherly embrace
Far away, I can see the sky

Myth and life
Represented into a single tree

Image for a Choreography 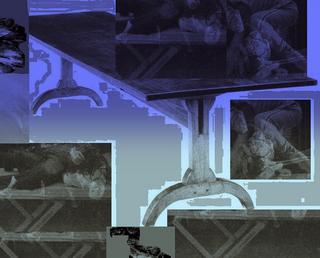 Collage by Andrea for her next dance-theatre piece "Heaven"

Give me an image!!

Ok. Gabi, I told myself, you will have to become an instant visual artist, let your intuition guide you....don't worry, make a collage, so this was the result for my next piece.

Flashes of the Moon 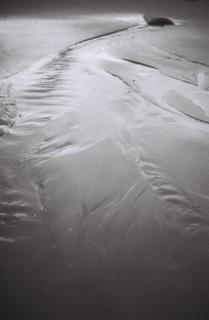 Flashes of the Moon

Take the body of my lover,
No, the cheeks of my nights awake.
And spin a broad, rough
Roof against the sky

In the high tone, Your tingling arms
In the process of transformation,
Trail in the Shadow

Take flashes of the moon
And through all, your arm
To avoid every ireful will.
You throw of speech.
And swelling now
In concentration

Not you, yet still to move
The unborn thought.
To make us understand.
Avoid the obvious.

Peel the gold of your reflection.
No. its careful constructed box.
And the taut fleshy
Bellies of an asset.

Untoss the pillows of your dream.
And step through the veil of beyond.